Hi ! I noticed that my PC has begun to have a hard time playing a session as my RAM usage was litteraly exploding …

On a new project, I loaded up an instance of CR8 and noticed the same thing! CR8 uses 1GB of RAM for every BLANK instance! How is that possible? There is not even a sample being loaded there and my Ryzen computer is to its knees !!!

Thanks for any help !

If it were loaded with a sample I’d understand, without that doesn’t seem right. Unfortunately, I’m not in front of my computer st the moment where I can cross reference on Logic/Mac.

It might be worth contacting support and query them about it as it may turn out to be a bug.

I checked on my machine and just noticed this. 1GB per instance of Waves CR8. I would like this to be down to 100mb at least lol

I made a ticket to Waves support for about 1GB pre an instance and this was my response.

I have investigated this issue with the relevant department here at Waves.

Please note that this is indeed an expected behavior.
The CR8 plugin is heavy on RAM usage, and it is so by design.

The main reason is the fact that it needs an infrastructure to handle 8 tables in one instance (That’s 8 samplers in 1). And each one of those tables can handle a very long sample length with all Sampler features individually. Therefore it requires about 1GB of RAM. ​".

In this case, I’ll just stick with my DAWs main sampler Sample One XT inside Studio One 5 for the time being.

Waves CR8 might be 1GB+ RAM pre an instance, but with the plugin not having multiple outputs, I feel that is too many computer resources for me.

Hi Korey,
Thanks for pushing this matter with Waves. Tbh, I can’t believe they assume using 1GB of RAM to be remotely acceptable … Seriously, 1GB loads an entire orchestra on Kontakt for the price of a one-shot snare in CR8!

I’m so uninstalling this, Thanks Waves.

I also thought it was unacceptable as well, so I did the same by removing it from my projects. I was only using CR8 as a replacement for Studio One 5’s Sample One XT as I’ve noticed an issue with overlapping tails while using fast repetitions (I even got Presonus to send my data to the engineers to fix the issue, hoping the next update fixes this).

In my opinion having CR8 to use 1Gb of RAM is a very bad design, and I simply won’t use it in my production. I might actually transfer the licence as I don’t see any use for it or in the future being flawed from the start.

Thats a bit of a bizarre design decision. I would think that it would dynamically adapt it’s memory requirements after you add the sample(s).

I run Logic it’s built in sampling options are actually quite good. Where I would chose CR8 is if I want to utilise more than one sample, which is Quick Sampler’s limitation, but really don’t need the deep layering features offered by the flagship Sampler. It bridges the gap for me.

The only real thing I’m missing as that a Quick Sampler patch can seamlessly in Sampler, without even the need to save. Once in CR8 you’re stuck with CR8, unless you want to resign the patch all over. But that is the limitation of any 3rd party sampler.

Very bizarre in my opinion. I was quite shocked that Waves would think to make a single channel sampler while also making it use such a high amount of the computer resources at the same time.

I only got Waves CR8 to replace Studio One’s Sample One native sampler as it has issues running samples at fast repetitions that can cause the tail of the sample to not be cut correctly before the next start.

In my opinion there is no need for Waves CR8 to use that much resources. It should be like you stated and be dynamic, but I think the Waves need time to understand this notion.

I don’t know if its true in this case, but in the case of their other instruments it’s usually the first instance that requires a fair deal of memory, but every instance after that is quite minimal. I assume they’re accessing the same resources.

I do wonder whether this is true for CR8. If so, it is probably worth it if you plan on using multiple instances, especially if you’re using it for it’s unique capabilities. It probably wouldn’t be as worth if you just want to use one or two instances, though, assuming this is true.

Here is the ram usage for my music computer. 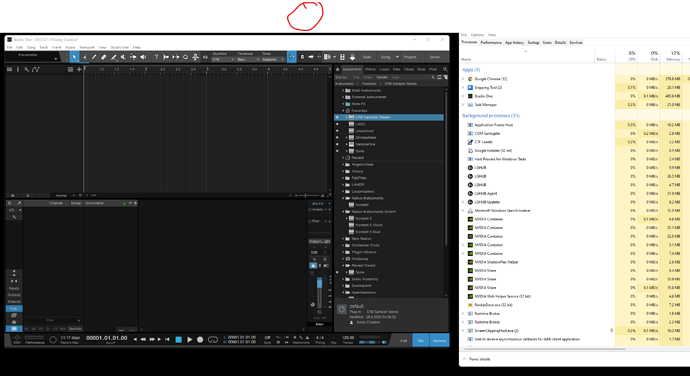 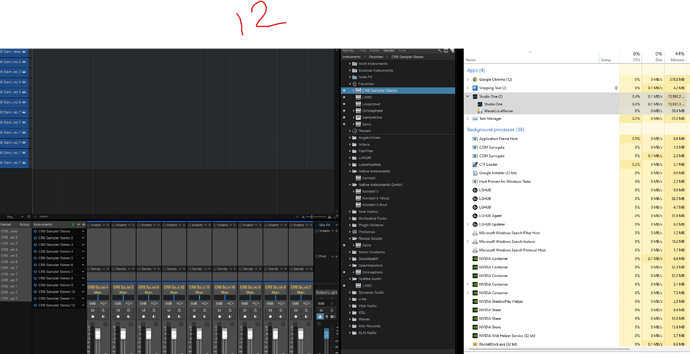 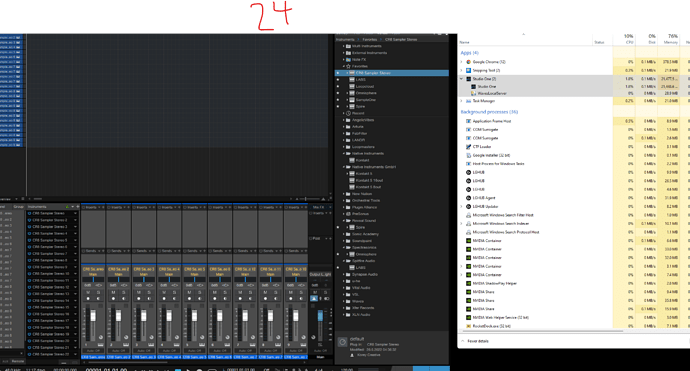 Yes, that was my observation too, that each instance of CR8 uses quite a bunch of RAM,
I wonder if this has to do with loading the (bundled) sound library database. (Cosmos)

Just as a installed CR8, I synced my own library (it’s quite big) to COSMOS, I thought that the database of this massive library could be what caused the RAM issue…

So I unlinked it all, but RAM usage stayed the same …

Also, I noticed CPU is also 8% while only loading a single instance, in a blank project…

I have to say I have wondered whether the CR8 was actually a precursor to something bigger coming our way, like a more fully featured sampler or granular synth of maybe something in between.

If that is the case and it leverages the same engine, knowing Waves it would, then that could explain the high memory use too.

Either way, if the memory use is a big enough concern try getting in contact with text support and voicing your opinion more formerly. I think this might be the right link…

Glad I have stayed away from CR8 then. Mainly because of no slicing and I now have Mimic. With Mimic having similar features(minus slicing) it uses MUCH less memory with an empty patch only using about 100MB. Even loading samples into each of the 8 slots is very minimal above that depending on the samples. So their reasoning just sounds like the way they decided to code it instead of making it efficient. Then again Reason/Propellerheads has been doing software samplers much longer than Waves.

Confirmed here too on windows 10 / reaper.

Just tried Groove agent and it’s not far away - about 800mb.

Kontakt on the other hand seems to be less than 100mb.

Just created an FR for this. Can’t link to it as I’m deemed a “new user” so if you could go find it and support that would be great

It really is getting out of control at Waves. They need to HUGELY optimize this stuff and make it a priority. The comments with comparison to Kontakt’s sampler is spot on here. I can load 50 instruments or have 12 wave grain voices running without encountering this much memory and CPU usage. It’s playing a sample. It’s not rocket science.

The other thing is COSMOS. You can compare this to Sononym. Unlike Sononym, COSMOS uses a single database. When I add 30 sample folders to it, it eats an entire 32gb of memory. I can add 100 folders to Sononym and it barely uses a couple of hundred MB. Each folder has it’s own database, but I think it’s highly optimised as well.

If this is the state of things to come, I’m not interested. Waves isn’t the be all and end all of plugins. Very disappointing. I know Waves are constantly optimizing plugins, but these product shouldn’t have been released in this state.

I’m just guessing, but maybe they are developing these plugins on very powerful distributed computing and are loosing all touch with reality. A lot of us work on large sets and run very powerful systems already. But this is just ridiculous. You’ve got to ask yourself:

What’s most disappointing is that I don’t think anyone has ever inserted a Waves plugin in the past and really had to worry or wonder too much about how much memory and CPU usage it’s consuming. It’s Waves! Yes things are getting more powerful with neural AI stuff, Clarity VX and Pro etc. But they are what they are, you want it, you take the hit. With these plugins… No absolutely not. But do I need to start worrying when I insert a Waves plugin what my CPU and memory is doing all of a sudden? Don’t need it thanks.

ALSO: Pretty terrible bug on Windows version of COSMOS, when windows autosnaps the COSMOS window from top of screen to taskbar (as is customary when your trying to position it on right hand side of screen) COSMOS’s sample list scrollbar completely vanishes and it’s impossible to scroll through your samples. You have to unsnap it. Bit nasty… (and vanishing, skinny scroll bars are just terrible on everything, spend 10 minutes trying to find them and another 10 trying to position your mouse over them to drag).