Hey Guys,
I honoured to be a part of this forum, I am Mastering Engineer based in Bangalore , India .
I would like to share my experience with the Saphira for Mastering .
Never come across a plugin with such in-depth parameters to shape harmonics .
Apart from the Odd and even Harmonics, the character Like B,D F and G are really useful in various situations. I like the G character for Rock, The D for Classical Music and B for World Music as an example. Also the Od and even Q;s are very smooth. Although you can only switch between the 2. We cannot have 2 eq’s simultaneously if im right ?
Also the tape emu is very good indeed , especially the 22.5 ips.
I use this with the WLM plus which i find quite transparent as a true peak limiter.
Saphira i think is the most underrated and Unique Mastering plugin.
Bravo!!

Hey @krma!
We are honored to have you here as well!
Saphira is indeed an hidden gem.

A plugin that provides an unprecedented control over harmonics structure and character. 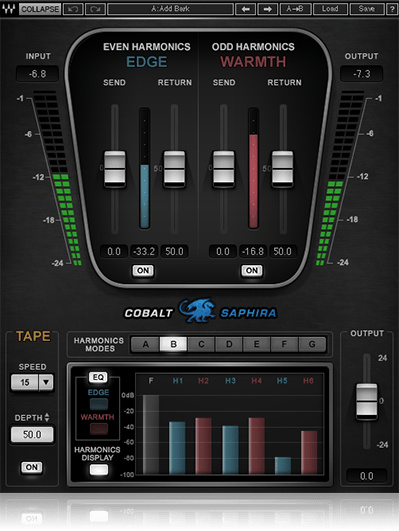 image.jpg399×531 76 KB
You can apply separate 4 band EQs on both the Odd (Warmth) and Even (Edge) harmonics simultaneously. The toggle is between the display of the EQ’s.
Check out adding a tiny amount of Tape modulation as well, for added depth, or more for creative effects.
3 Likes
krma March 13, 2019, 1:54pm #3

Thank you Yishai .
Will check it out !

Yes you absolutely could use it for mastering.

The advantage is you can tailor the harmonic enhancement for what your production needs as opposed to just running everything through the same box/plugin and getting the same type of character regardless on whether it works as well for a particular project.

The Send and Return do different things, though Send does change the level of the harmonics, it is doing by pushing the saturation process harder getting more harmonics out of it as a result. The Return is what you would use for a conventional level control.

I really dig this plugin!! I’ve been eagerly awaiting more from the Cobalt series, but it just hasn’t dropped yet!?!

This is really a great plugin! Not so common to see people who use it too.

I guess it’s because it doesn’t look vintage enough for them!!

It’s not heavily promoted or used these days. In some ways I don’t mind, it’s like one of Wave’s best kept secrets now. Although, I’ve been eagerly anticipating the next plugin in the Cobalt series.