A few days ago I tested a Sabrent USB audio adapter dongle.

When connecting the dongle and selecting it in the NX software, virtualization works and sounds fine.

Not sure how to fix this issue, any ideas?

Please check if it’s possible to disable all enhancements under Speaker Properties>Enhencements. 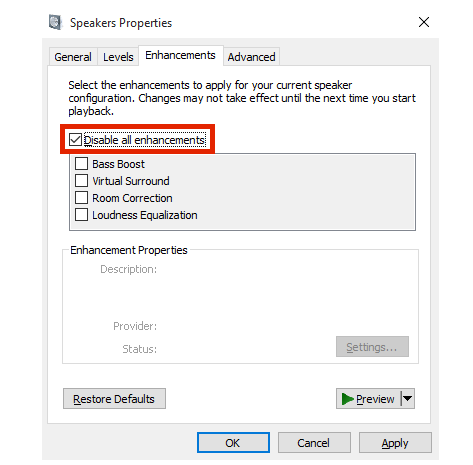 Does it make any difference?

This tab is not there.

I unchecked allow applications to take exclusive control of this device. Same issue.

Should I uninstall Xonar drivers?

Updated other 2nd OS, the issue is not there. So I don’t think it has anything to to with windows updates.

Plugged the dongle back in, disabled it, tried everything I could think of.

Another time had a similar issue where I installed a usb amp/dac and waves would keep going back to it. Solved the issue by deleting any files listed waves or nx but this time it did not work.

It’s only the Xonar that has the issue.

Also not getting any info on this page of the Waves properties, but don’t remember if there was anything there originally. 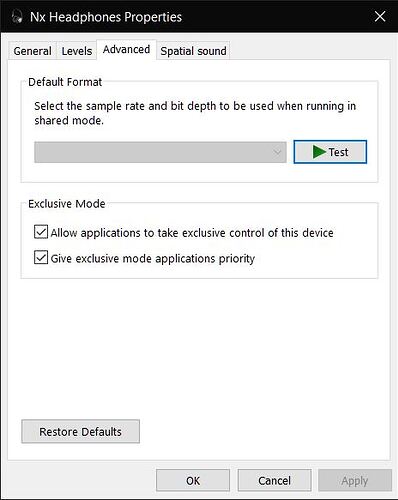 Made some progress.
Works when the Xonar is set to 2 or 8 speakers. On 4 or 6 it still has the same issue.

Hi @email_cv_82
thanks for the update good to hear about the progress.
Waves NX supports Stereo, 5.1, and 7.1 surround formats.
It makes sense that Xonar’s 4 configurations wouldn’t work.
Is there a way to change the channel order in Xonar?

Not as far as I know. Maybe with a 3rd party software.

But I just left it on 7.1. I assume the dead channels with a 5.1 source for instance are ignored.

Thanks for the help.