LV1 Midi Tempo Sync Problem - Any Midi experts out there?

We use backing tracks with our live band and run through the Waves LV1 mixer. We trigger scene changes and other equipment to switch presets using sequenced midi commands from our uTrack24 player. Everything works great except that LV1 has an issue with syncing to external midi tempo. It’s always + / - 4-5 BPM off. This is a major problem when using effects like delay which need to be in sync.

I’ve raised the issue with Waves who have said they will look into it, but nothing has happened for a while and the issue still persists.

I have a FIT controller connected to LV1 which of course has a Tap Tempo button. This is fine, but it would be better to send Tap Tempo messages from our Backing tracks midi control file in order to keep LV1 in sync. Manual tap always eventually goes out of sync.

I’m not much of a midi expert apart from the normal stuff. When I monitor the midi out port of the FIT, on tap tempo it sends the following:

Does anyone know how I could enter these commands into Logic so it plays them back in time with the song, effectively sending tap tempo instructions to LV1 to keep it in sync?

I have tried sending these commands as Sysex from logic (using event editor) to LV1 but LV1 doesn’t respond: 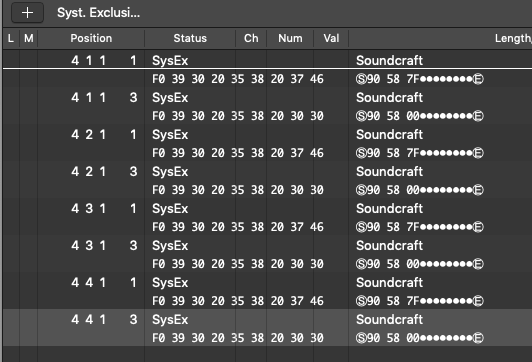 Would be great to get this working.

Hi I hope someone is going to help you out here , Im actually trying trying to figure out a step that seems to me you have done already , so maybe you can help me out …

, I’m using the LV1 to perform live , I’m playing keyboard on a korg pa4x and sing (together) I’m using h delay in LV1 on my vocal , I’m setting to delay to match the tempo of the rhythm the problem is that I have to dial in the tap tempo every time the tempo changes , (which is difficult when you sing and play together) so I’m trying to send MIDI (out) from my korg pa4x into the LV1 to trigger tap tempo according to the rhythm im playing without much success , from your post it seems that you have done that already , your help with this will mean a lot for me !

I forgot to mention in the previous post , I use a didgirid iox as my IO so no midi ports on it (I’m trying to route midi over USB from korg pa4x which should work just fine as I’ve done a lot of times in the past as a midi controller with vsts) but I have a Sound studio stg1608 (which I’m not using anymore since I don’t like how the preamps sound compared to the digigrid , ) which has a midi port on it if that’s my only option that would get done what I’m trying to

(Sorry for the grammar my English is not the best)

I wish I could give you good news, but every time I tried to send tap tempo commands to LV1 it never responded. It only seems to accept them from the Midi Plus controller. I even tried tapping the tempo on the Midi Plus and recording it into Logic and then playing it directly back to LV1 but it never changed the tempo.

If waves isn’t going to fix the bad external Sync of LV1 then they should at least allow external input of tap tempo commands so we can pogram tap commands into our external gear.

I submitted this problem over my beta tester account as well, but I didn’t get the feeling Waves were interested in fixing it.

It’s a total shame because I had to get an external Delay unit for our shows, because I couldn’t use the internal Delays from waves… quite dissapointing.

I can only hope with the coming updates that they fix the problem.

I have some good news for you!

I have been speaking to the Waves guys and found a temporary solution that might work for you. If you install Waves Super Rack (you don’t need a license to install it, only to run it) and then go to:

to the Modules folder of LV1, it will appear in LV1 as a secondary MIDI Controller the next time you open the progrm.

Inside this, you can map a note to the Tap Tempo option, then just send LV1 4 x midi notes at the beginning of your song at the tempo and LV1 will lock onto it.

The downside is, if you want to recall Scenes in LV1 by midi, this no longer works, or at least I haven’t managed to get it working.

Let me know how you go!

Hi did anyone figure out how to do this without losing the ability to recall scenes in LV1 via midi?

Hi @toby and all,

Thank you for sharing this and your intent to assist others.
However:

This is NOT an official workaround, not something Waves recommends or condones, and Waves Support cannot support this configuration.

Is it possible for Waves to fix this issue or offer an official workaround sometime? I have raised it with Waves several times over the years (also in the beta platform).

It’s really a big negative for the whole platform to have such poor sync. It basically renders all delay-based effects useless and means the FOH engineer needs to constantly re-enter the tap tempo manually.