hi @YishaiWaves ,
after reading through the posts above: it might a be a good idea to add the step (*1) to the waves central quickstart video.

*1: after starting waves central you usually have to enter the credentials of an admin account of your system

Thank you. It worked flawlessly

Holy cannoli! This worked! I’ve been banging my head against the keyboard for three hours, then tried this and it…just…worked.

I’ve tried all the above methods. But always give me this result.
MacBook Pro M1 Max 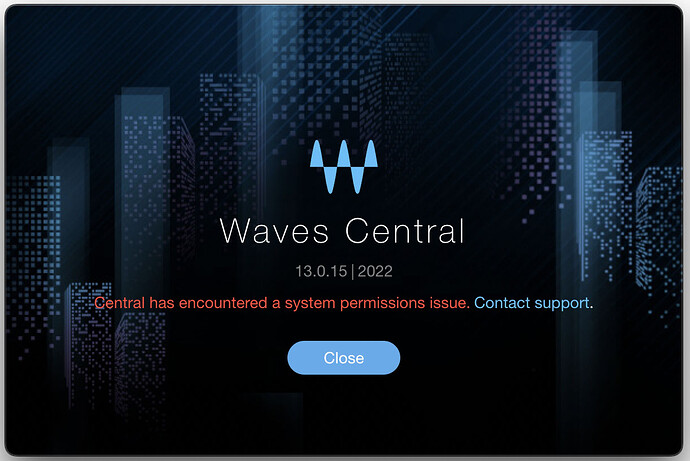 Perhaps it may help if the password prompt was less ambiguous and more specific with its request by asking for the “computer’s user/admin password”?!?

Thanks for that tip, Simon. I had not considered that and was trying to use my Waves account info.

Please help me ,(. My woes central fix on this step and I don’t know how to figure it out.

It’s actually a “feature” that it always checks and fixes any permissions first, especially since Apple tightened it’s security measures in recent years.

One of the primary causes of a plugin misbehaving is incorrect permissions, so this step helps alleviate any issues that would stem from such a problem.

See I did this and it showed me the roots on terminal, but when it started up the Waves Central app it put me back to the “I agree” and I pressed I agree then it still says “Central has encountered a system permissions issue.”

Same. So sick of this. I can’t install. I’ve tried every documented suggestion and gone through a support ticket. The workaround of running as root no longer works with the latest update of Waves Central. It’s a disaster. I’m also on MBP M1 MAX.

UPDATE: Was able to work around by running it from a new account on the Mac. It worked this time. In the previous version of Waves Central, this did not work and only launching Waves Central with sudo in Terminal actually worked. So I guess we are chasing a moving target. This time around, if the only difference is the user account, then the permissions repair script in Waves Central doesn’t work, even though its log said that everything was fine. The logs were not helpful to support, and I can see why. There is no description of what went wrong anywhere in them.

Not sure if i’m in the right topic! But i just did bought a new MacBook Pro 13 M1/16GB/1TB. And i used the immigration tool to transfer from my old mac to my new mac. It was a successful transfer. I made sure to deactivate all my plugins on my previous Mac, and when trying to activate to my new Macbook, i didn’t get any options to choose were to activate. My old mac is listed and not my new mac. How do i fix this? Anyone?

hi @JonaOffisiell
I would open a new topic, your problem might get lost in this thread.